Could everything we’ve been told about narcissism be wrong?

In a recent Coffee With Scott Adams episode #1234 Scott gives a fresh take on Narcissism in the last quarter of the show.

Who is Scott Adams

More than anyone else, Scott Adams has changed and influenced my way of interpreting the world around me, and my filter on reality. I’ve been following him for several years and continue to learn so much. The skills of persuasion, reading people, the concept of systems over goals, and talent stacks are just a few.

Scott Adams is the creator of the famous Dilbert comic but he is so much more than a comic artist. He is a master persuader with piercing insight which he delivers through his daily livestream commentary on current events. Between all the political and current event commentary Scott intersperses micro-lessons on healthier habits and reprogramming your perception of reality for resilience and mental health. Well worth checking him out. I’m a paid subscriber to his content over at Locals.

One of the many reasons I follow Scott is his ability to reframe concepts and events against conventional wisdom in a way that is outside of the box, yet still logical and a product of critical thinking.

He shows you how different ways of thinking are possible outside of our collective group think, which we so often find ourselves locked in from our societal forces as we go through life often on auto-pilot.

You can read my previous posts on Scott Adams; McCloskey Persuasion Review here and How to Become Successful here.

Let’s get definitions out of the way. In this particular episode, Scott is talking about a particular type of Narcissism. That is the type often portrayed in pop culture of the grandiose delusions variety only not the abuser type.

Not the exact clinical picture but the layman’s understanding. There is overlap between different definitions though.

This is in contrast to Narcissistic Personality Disorder NPD – which can be defined as; “ a long-standing pattern of grandiosity (either in fantasy or actual behavior), an overwhelming need for admiration, and usually a complete lack of empathy toward others. People with this disorder often believe they are of primary importance in everybody’s life…” – PyschCentral

To summarise, when Scott talks about narcissism here, he is referring to how the term is used in common language, not to describe people who display grandiose delusions.

The tale of Narcissus has its origins in Greco-Roman mythology. In a nutshell, the story of Narcissus is that “In Greek mythology, Narcissus was a hunter who was known for his beauty. According to Tzetzes, he rejected all romantic advances, eventually falling in love with his own reflection in a pool of water. He later died, and in his place sprouted a flower, bearing his name.” 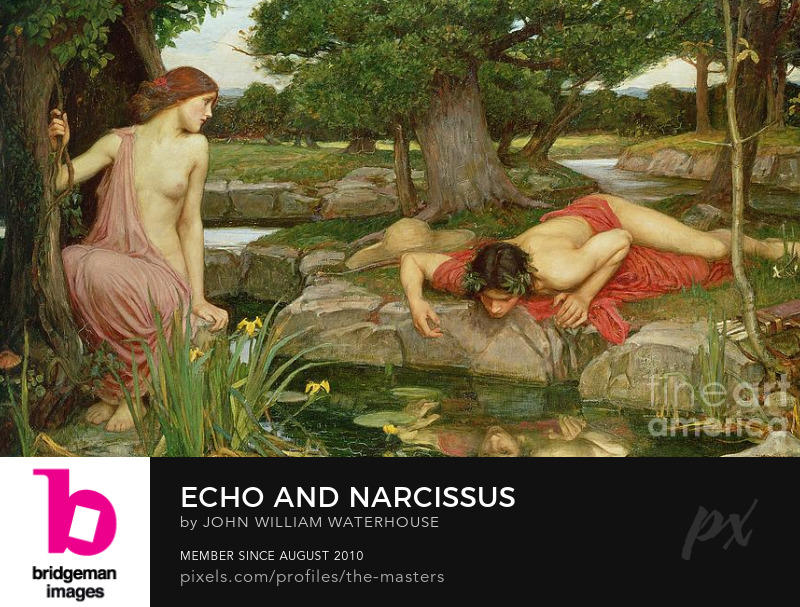 The myth of Narcissus features in one of my top three favourite books – the Epic poem of Dante, The Divine Comedy. The myth also features in Ovid’s Metamorphoses as well as the works of Petrarch.

Interpretations of the myth are preserved in ancient and modern artworks in the form of paintings, sculptures, books, and films and the drug-fuelled mad mind and surrealistic art of Salvador Dali.

If the myth of Narcissus interests you, you may also be interested in Pygmalion – “a legendary figure in Greek mythology who was a king and a sculptor. He is most familiar from Ovid‘s narrative poem Metamorphoses, in which Pygmalion was a sculptor who fell in love with a statue he had carved.”

“I like to think I’m not a narcissist, but truth be told, we all have those sides to our character.”

In this episode, Scott talks about Narcissism to make a point about the ‘Observer Problem’.  Scott defines the Observer problem as when someone believes something is happening, but it isn’t. The observer doesn’t know that the problem is on their end.

This was in response to an article in which a female reporter was demonstrating cognitive dissonance (much like the infamous Cathy Nuewman & Jordan Peterson interview). The article in question was about men not wanting to wear masks (because ‘toxic masculinity’) versus women not wanting the vaccine (because the health industry hasn’t earned their trust).

I’ve transcribed what I feel are the main points from his show in sequential order. Feel free to listen to it in its entirety.

“If Narcissism is a mental illness, as we’ve all been told, why is wokeness not?”

[As mentioned above this doesn’t deal with the ‘psychopath, void of empathy’ type of narcissism – but it does challenge us to rethink who is considered to have or be the problem.

Scott doesn’t elaborate here why he doesn’t believe in the standard view but being a follower of his daily show for years, I noticed that sometimes as he works through an idea, his words out of context can seem dismissive but it’s really not. As he says, he has only been thinking of this for a few minutes and is not trying to debunk any mental health people. He’s just ‘putting it out there’.]

“There’s part of me that’s wondering if all mental illness…is about whether you think you can control your reality or not.”

“I’m not going to say all mental illness, that would be crazy but I’m wondering if a lot of it, a lot of mental illness comes down to whether you think the world is controlling you or you control the world. Now I’m not saying that either one of them is true. It’s not true that the world controls you, and it’s not true that you control the world. There’s an interplay there. But I wake up every day believing that I control the world and I feel as though I have tremendous mental health. Because every day I wake up and say, well if that is a problem, I can change that. If I made that mistake, I can change that. If i’m not good enough I can get better. I have a complete sense that I can control the world. Now imagine if you thought that people were after you… I feel like, obviously there’s an organic part to mental illness, you’re not just thinking your way into it. But I got a feeling that a lot of it would go into that category. Of whether or not you feel you can control your life, whether it’s true or not.”

[Scott does acknowledge that there is a biological and real part to mental illness, that it’s not purely a mental construct – but that we probably overestimate the degree to which we see it as a problem rooted within us that is more difficult to change than may actually be the case, sort of a self-fulfilling prophecy of expectation. ]

A commenter on the episode’s live stream points out that ‘people of faith believe that God is the controller’. Scott’s response:

“I do think it’s useful to put your sense of control in a third party, and I think it’s one of the things that religion does really well – independent of what’s real and what not real in your religious belief. It’s just a good technique to imagine that control is with this friendly character who’s got your best interest in mind. I think that’s good for mental health too. I think religion is an excellent technique no matter what you think of the reality of it.”

[This does match up to what the clinical research shows how internal locus of control (ILOC) and resilience lead to healthier lives.]

Scott then reads a definition of mental illness; “Significant changes in your thinking, emotion, and behaviour.”

“Would you say the people who became woke had significant changes in their thinking and emotions? I think so. Would you think that the wokeness people are distressed or they have a problem functioning in society? Because of their wokeness philosophy? I would say so. So if wokeness has all the characteristics of mental health – meaning it’s bad for you – why is that not a mental illness. But narcissism – the grandiose type is literally good for you and makes you happy and more successful, and that’s considered a mental illness? Now you can see it right.”

Now, there are many variables at play when it comes to human interaction, and it is a lot more complicated than it is being described here. But in this case (and in many others), reframing it this way is very helpful.

I’m actually of the opinion that when it comes to the typical behaviours that women in general express annoyance or disgust with towards men (arrogance, being a jerk, etc), that women should be blamed for them. The reason for this is because it is men that – in general – display these behaviours that are the ones that receive the most attention and interest from women.

You cannot complain of a trait or behavior that you reward. It may not be you rewarding but it doesn’t have to be if she is getting tons of simps on TikTok – it’s just attention economics. Of course, I hold the same view the other way around. Behaviours that men often don’t like in women are actually men’s fault, because these behaviours are being rewarded.

We have to be responsible and understand that our time and attention is currency, and we are surrounded by politics, platforms, and behaviours that we don’t like as a society because of what/who we have chosen to spend time on, to give attention to, to date, etc.

I think all of this highlights the importance of internal locus of control, and to continue to question what is taken ‘as is’. Especially in the humanities which have built entire frameworks of knowledge and methodology on a base of unreproducible findings and controversial claims.

I myself have suffered from mental illness since adolescence. It is only now that I am starting to realise how important internal and external locus of control is in how I frame situations and react to them.

To learn more about Wokeness, how we got here, and where it’s headed, start with the works of Professor Stephen Hicks and his seminal work, Explaining Postmodernism.

I also strongly recommend evolutionary psychologist and professor Gad Saad – the Lebanese Jew who escaped exile from Muslim persecution in Lebanon. His latest book is The Parasitic Mind: How Infectious Ideas Are Killing Common Sense.

And last but not least Carl Benjamin who runs The Podcast of Lotus Eaters. I’ve linked legacy platforms but they are on alt platforms like Bitchute, Gab, Minds, etc also.

Half the harm that is done in this world

Is due to people who want to feel important

They don’t mean to do harm ­

But the harm does not interest them.

Or they do not see it, or they justify it

Because they are absorbed in the endless struggle

To think well of themselves.

I always find topics like this so interesting, topics that intersect with so many other seemingly disparate areas of life and which have been part of the psyche of various societies throughout so much of history.

Thank you for your support.